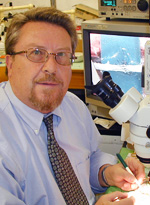 Dr. Szabo accomplishments in medical research and education have primarily been in magnified surgery, beginning with microsurgery in 1972 (Reconstructive Neurovascular, Fertility surgery, Urology, Ophthalmology) and subsequently in laparoscopic surgery two decades later (general, gynecology, urology, fetal, and cardiovascular Robotic surgery). He was involved with pioneering work in both modalities including research and development of techniques, teaching methodology, clinical applications, instrumentation and sutures, all of which have become standards in numerous surgical specialties.

Established the first multidisciplinary microsurgery training and research laboratory with coworkers and they subsequently published the first teaching manual in 1975
Among other factors “Training the trainers” program was responsible for the rapid dissemination of this new modality.
In 1983 conducted a series of microsurgery lectures and workshops in Hungary the first in a series of micro and later in Laparoscopic Educational Mission.
In 1991, during the first Advanced Laparoscopic Course at the University of Utah Medical School the systematic suturing technique was introduced by Dr. Szabo, heralding in the second phase of laparoscopic evolution: Advanced Laparoscopy.
In 1992 at UC Davis with coworkers created the first successful Laparoscopic Radical Prostatectomy study on dogs proving its feasibility for clinical application.
In 1992 Established and run the first Formal Academic Laparoscopic teaching course as an Associate Director with coworkers at the University of California, Medical School, and Dept. of Surgery which served as a model that many other programs had emulated world wide.
He was first to accomplish a successful LIMA to LED anastomosis (22 minutes) in
A surviving large animal model using a remote Surgical Robot (Zeus), proving its potential usefulness in cardiac surgery.
He was also a principal member of a team which was first to develop direct fetal (fetoscopic) percutaneus-transuterin access and operative techniques at UCSF in a joint project with the University Of Munster, Germany
1993 First Base of the Brain Workshop with University of St. Louis, Medical School, Dept. of Neurosurgery
1993 The first series of Advanced Laparoscopic Workshop in Pecs, Debrecen, Szeged, and subsequently several workshop every year until accepting the invitation of University Szeged Medical School as a Visiting Professor to train the in house residents and interested Clinicians in 2003 an co editing the course Syllabus in 2006.
Dr. Szabo has trained thousands of surgeons over the past thirty years worldwide.
Organized extensive training programs, workshops in USA, Canada, Singapore, Florence, Caracas, Neuss, Tokyo, New Delhi, Ludhiana, Mumby, Ujvidék, Szeged, Pécs, Debrecen and Budapest.
Conducted Advanced Laparoscopic workshops in India in 1996, 2003 and 2004
He has written extensively(13 books), including co-authoring a textbook, editing an annual surgery review book, numerous book chapters and serving on the editorial board of various surgical journals.
Dr. Szabo is a Fellow of the International College of Surgeons, U.S. Section, and he is a honorary member of three prestigious surgical societies: the Society of American Gastrointestinal Endoscopic Surgeons (SAGES), Hungarian Gynecological Society, Yugoslav Endoscopic Society, honorary member, and Society of Reconstructive Microsurgery (associate member). He is a member of several other surgical organizations and is the founder and Director of the Microsurgery & Operative Endoscopy Training (MOET) Institute in San Francisco, accredited with commendations for educational design from the Accreditation Council for Continuing Medical Education (ACCME).
Previous formal academic affiliations have included with the University of the Pacific, School of Dentistry, (San Francisco) and the University of California School of Medicine, San Francisco (UCSF) He currently serves on various committees of SAGES and is the recipient of numerous awards for his research work and innovative teaching methodology, including commendations for educational design from the Accreditation Council for Continuing Medical Education.
Dr. Szabo has always worked with the outstanding pioneers of surgery and their ambitious disciples, seamlessly combining talents, providing leadership, organizational skill and working tirelessly on a global scale, advancing the Science of Magnified Surgery.
In Hungary the first educational visit took place in 1983 when Pof. Gal and Prof. Lampe arranged a microsurgical workshop in Debrecen, Prof. Kis the leader of the OTKI arranged a workshop in Budapest. There was a Lecture and workshop in Szeged on the invitation of Prof. Herceg.