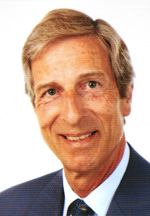 Dr. A. Johannes Coburg had his surgical training at Oldenburg, starting 1966, and Hannover. 1969/70 he was research fellow on the field of organ transplantation with Professor Thomas Starzl at Denver. Back to Hannover Medical School, he became senior co-worker with Professor Rudolf Pichlmayr in general surgery and organ transplantation. 1978 he was elected to become head of Surgical Clinic I (General and Vascular Surgery) in the City Hospital Neuss/Rhine, Teaching Hospital of University of Düsseldorf.
His research was confined to transplant immunology, immunosuppression, vascular access surgery, and many various general surgical topics. His thesis (Habilitation) about „Clinical Application of Normovolemic Hemodilution" (1975), using autologous blood in order to save homologous blood transfusions, was correlated with extended circulatory and coagulation studies in major surgical procedures. For lectures about this topic he was invited by eight American University Hospitals that he visited on a round trip in 1976 (Boston, Chicago, Denver, San Francisco, a.o.).
In 1979, he became Professor of Surgery.
His clinical work at Neuss comprised general (visceral), vascular, and thoracic surgery.
In 1990, he established endodcopic surgery in the City Hospital Neuss. From 1991 symposia and workshops for training in endoscopic surgery, under the auspices of German Society of Surgery, were started to be held twice a year, for 2 days each, throughout 2002, most of which together with Professor Zoltan Szabo as Chief Tutor.
Dr. Coburg has given 122 written publications and given 168 oral presentations. He is a member of German Society of Surgery since 1972, of German Society of Vascular Surgery and Endovascular Therapy, of Northern-German, Rhine-Westfalian and Middle-Rhine Society of Surgery. In 2001, he was honored with the Silver Medal of the City of Neuss.
After retirement, he continues teaching at surgical seminars for medical students. He partakes in voyages and river cruises as a ship´s doctor. He is an advisor in medical litigation lawsuits, and helps to foreward the hospice idea. He is also involved in the article selection process, commissioning key authors and new surgical topics for Surgical Technology International.